A poll carried out by YouGov on behalf of damp-proofing product specialists Safeguard Europe has found that 38 percent of people would withdraw an offer on a house that they were considering purchasing if it was discovered that it suffered from damp.

Even where potential house buyers were prepared to continue with the purchase, a substantial discount would be expected to compensate for the cost of repairing the damp problems. 48 percent of respondents said that they would expect a price reduction with 18 percent expecting a price reduction of 20 percent or more – equating to more than £42,000, based on the June 2016 UK average house price of 213,927. 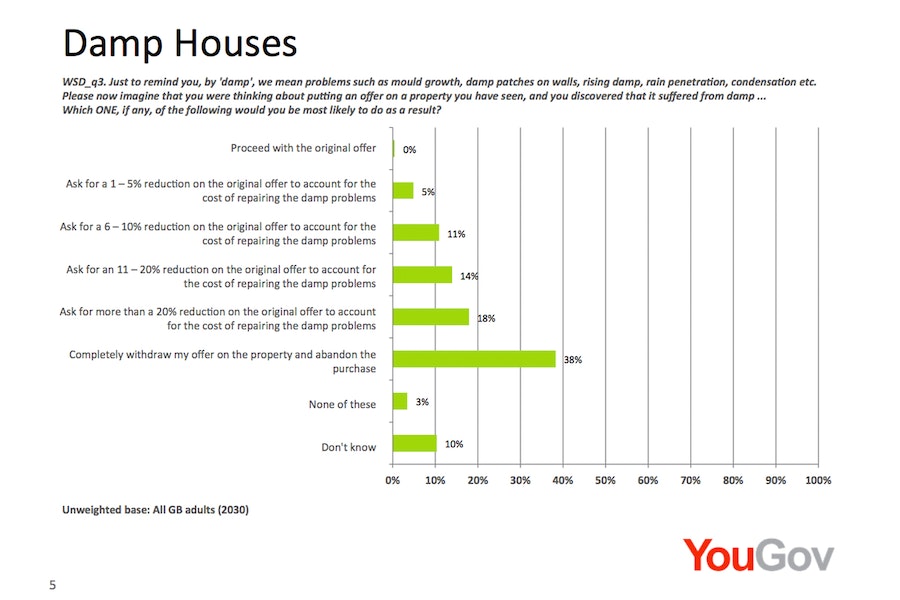 38 percent of people would withdraw an offer

In areas of the country where property prices are particularly high the effect would be even more dramatic – for example, a 20 percent price reduction would equate to almost £115,000 in inner London where the average house price is £574,915

According to Hudson Lambert, Managing Director of Safeguard Europe, the key message that comes from the survey is “Fix damp before selling”.

We already knew that damp was a big turn off for potential house purchasers. However we were still surprised at the degree to which it affected purchasing decisions.

The fact that so many people appear to be willing to walk away from a house purchase or expect a price reduction of tens of thousands of Pounds would indicate that people’s perception of the cost and difficulty of dealing with damp problems is overblown.

In reality, most damp problems are relatively straightforward to deal with. Product developments such as damp-proofing rods and damp-resistant plaster systems have made the treatment of common forms of dampness easier and more reliable than ever before. Even in extreme cases where dampness is widespread in a property, it is rare for treatment costs to run into the tens of thousands.

For this reason, it would seem that most sellers would be best advised to treat any dampness issues before placing their properties on the market as this will allow them to attract the most buyers and achieve the best price.– Hudson Lambert – Managing Director of Safeguard Europe

This site uses Akismet to reduce spam. Learn how your comment data is processed.

Just fill in your details below and we will contact you.

I felt I just had to let you know how impressed and pleased i am for a very professional job done by your men,fast and courteous workers,had the job done in two days,very pleased thank you. Wimbledon.